Getting a Formula One car to the other side of the world and onto the grid in front of thousands of spectators and millions of television viewers is no simple task.

Before the Lewis Hamilton’s and Sebastian Vettel’s of this world can even think about turning a wheel, there are a myriad of processes that need to happen before an F1 car is ready to race.

In the first edition of my F1 insight series, McLaren Design Engineer Alistair Niven explained the design process – the most essential phase in the development of a Grand Prix car.

The next, crucial job is for the team of mechanics to ensure the car is ready to be tested and then raced.

I’ve been speaking to former Red Bull Racing mechanic Dan Fox about life on the road and the demands of the profession. He started by telling me it was a job he aimed for from a very young age.

“I wanted to become a Formula One mechanic from the around the age of five.”

“My family was involved in motorsport and we always watched the Grand Prix growing up. I went to my first Grand Prix at Silverstone in 1988 and I was hooked.”

But for Dan, the journey to achieve his childhood dream of becoming an F1 mechanic was a long one, involving a lot of hard work and dedication.

“I worked my way up the ladder in the junior formulae, a bit like most F1 drivers”, he said.

“I started off at an indoor kart track called Magna Karta in Milton Keynes while I was at school. While I was working there and doing my GCSE exams I would send letters and CVs to race teams in the area. 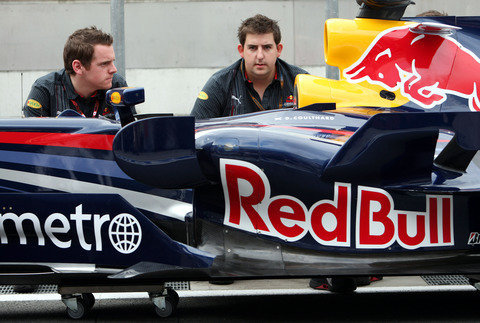 The journey to becoming an F1 mechanic was a long one

“At the end of 1997 Fred Goddard from Fred Goddard Racing called me over for an interview and I started there in early 1998.

“We ran Formula Ford Zetec cars in the British Championship against the likes of Jenson Button that season. We also had a number of F1 and F3000 cars that we ran for customers in Boss Formula.”

It wasn’t long, though, before Dan started working with some of the stars of the future.

In 1999 he worked in Formula Renault and a year later moved onto British F3, working with Gary Paffet.

The following year was another Formula Renault campaign – this time as a mechanic for current Formula One driver Heikki Kovalainen.

After a few more years in British F3 and the World Sportscar Championship, Dan finally achieved his goal of becoming an F1 mechanic.

His F1 career began with Red Bull Racing in 2005, with whom he would remain for five years, working with the likes of David Coulthard, Mark Webber and reigning World Champion, Sebastian Vettel.

“The job was very much as I expected it to be”, he said.

“Lots of my friends and ex colleagues worked in F1 plus I had read books by Steve Matchett about his time at Benetton.”

Although a familiar environment from his time working up through the ranks, Dan was keen to stress the demands of his role with the Red Bull team.

“The most demanding aspect of the job was the long hours and time spent abroad”, he said.

“When I was in F1 there were no curfews and in those days we had in-season testing.

“Sometimes we would work from 6.45 in the morning through to 4am the following day, for three days in a row at tests and race weekends. 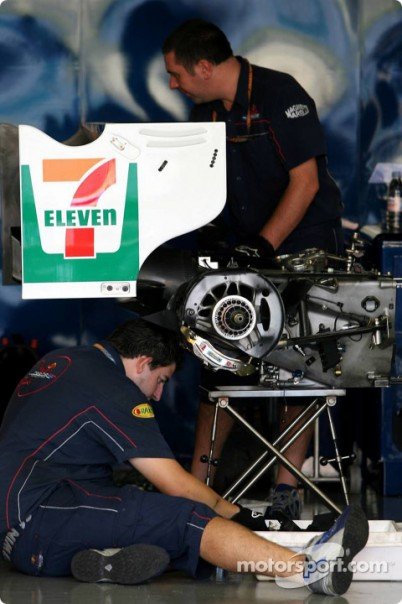 F1 mechanics work flat out during a Grand Prix weekend

Dan said it is “difficult for the armchair enthusiast to understand” the demands and pressures that F1 mechanics are under, “but there are many good books out there which give info about what goes on in Formula One.”

“After a Grand Prix ends and TV viewers at home tuck in to their Sunday lunch, F1 personnel are just about to start another days’ work, packing everything away and prepping the cars ready for transport back to the factory or the next race.

“Most teams don’t finish this until midnight.”

In his five years with Red Bull Racing, Dan said his favourite moment was the 2006 Monaco Grand Prix, when David Coulthard picked up a third place finish – a huge achievement then, for a team that has made a habit of winning the Drivers’ and Constructors’ World Championships in recent years. 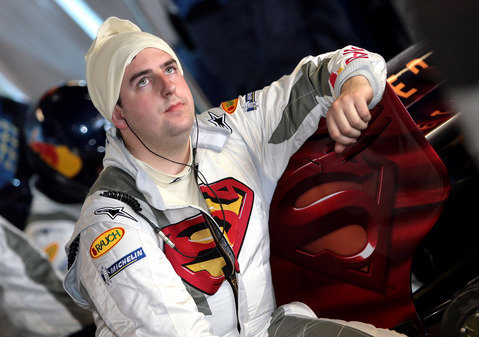 It was a race weekend when the team were sponsored by the Superman Returns film, and Coulthard duly wore the Superman cape during the podium ceremony.

One of his most challenging tasks as an F1 mechanic, however, came a month later in Montreal.

“We had one hour to change an engine in David Coulthard’s car before the start of the 2006 Canadian Grand Prix, after it had an air leak from part of the pneumatic valve system”, he said.

“Later that season we had a major fuel leak on Christian Klein’s race car at the Hungarian Grand Prix and we could not fix this in time, so we had to use the spare car that day.

“For me, the worst moment, though, was in 2007 when Vettel (then driving for Red Bull’s sister team Toro Rosso) hit Webber during the safety car period at Fuji in the Japanese Grand Prix.

“We could have won that race and Webber had battled to drive with food poisoning.

“That day was a sad day for everyone involved.” 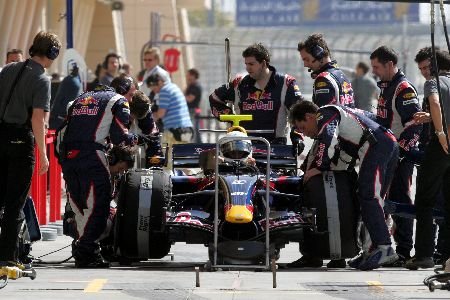 Keeping the tyres warm: F1 mechanics have a lot of responsibilities

At the pit stops, Dan was initially responsible for putting one of the front wheels on before he later took charge of the rear jack.

He said his favourite race was Melbourne due to the circuit’s close proximity to the beach, but the facilities and hotels at Imola (which used to host the San Marino Grand Prix) and in Barcelona were “not great.”

Unfortunately for Dan, his F1 career came to an end in 2009. He had recently moved over from the Red Bull race team to the test team, which made him redundant when the ban on in-season testing came into force that year.

Since being made redundant, Dan has set up his own company, Team Fox Racing, based near Buckingham and only a short drive from Silverstone, providing “first class race car preparation at all levels of motorsport.”

His advice to any aspiring F1 mechanic?

“Work hard at school and try to learn a second language, which will help if you make it to Formula One.”

Error: Twitter did not respond. Please wait a few minutes and refresh this page.